From Heraldry of the World
Your site history : Thaxted
Jump to navigation Jump to search 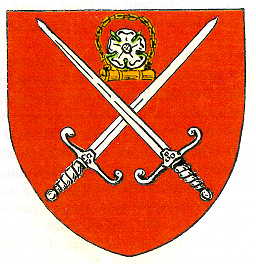 Gules two Swords in saltire Argent in chief a Rose of the last within a Fetterlock Or.

The town's earliest charter of incorporation as far as in known dates from 1554 and Thaxted's status as a borough lasted until the reign of James II. The crossed swords on red appear to be derived from the arms of the Cutlers' Company of London. Thaxted was once famous for its wool and cutlery, which enabled it to become one of the most prosperous towns in Essex, as the size and glory of its church illustrates. The fetterlock and the white roses are Yorkist badges. The Manor of Thaxted passed by inheritance, as a portion of the Clare estates to the royal House of York. Cecelia, mother of Edward IV, was granted for life the 'Manor and Borough of Thaxted' by her son Richard III.

Literature : Information and image from here.