The National Arms of Luxembourg

From Heraldry of the World
Your site history : The National Arms of Luxembourg
Jump to navigation Jump to search

THE NATIONAL ARMS OF LUXEMBOURG 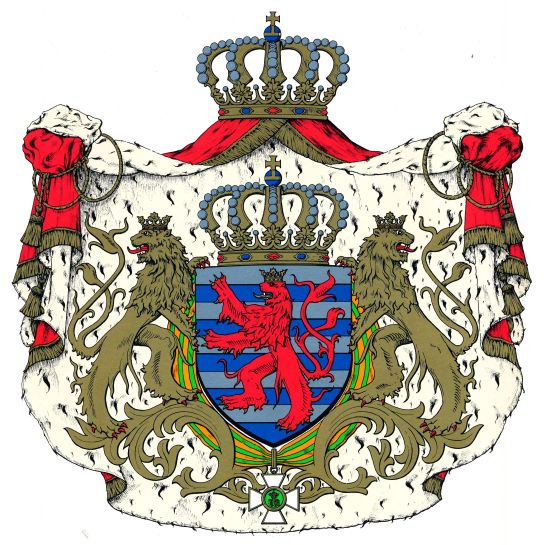 At the end on the 12th century the County of Luxembourg was ruled by the Counts of Limburg. The coat of arms of Limburg was a red lion in silver. As rulers of Limburg and Luxembourg, the lion probably became double tailed.

The oldest use of the double-tailed lion with the blue bars dates from a seal on a document dated May 2, 1242. Henry IV was at the time the ruler of Luxembourg and probably added the blue bars to distinguish his arms with those from his father. `

The colours are first mentioned in the Bigot Roll of Arms (1254) as barry of silver and blue with a red , gold crowned lion rampant.

The arms basically never changed, only after 1262 the lion changed direction as compared to the old 1242 seal where the lion faces left.

The number of bars, on the other hand, was not very constant during the years. It ranges from sixteen under Henry VI to four under Philip the Fair. From the beginning of the fifteenth century, the number gradually began to stabilize to ten.

For nearly four centuries, Luxembourg was governed together with the Netherlands, after 1581 with the Southern Netherlands. A French occupation from 1678 to 1698 was only a brief interruption. The break-up of the administrative association was announced by the decision of the Vienna Congress in 1815 to raise Luxembourg to a Grand Duchy in personal union with the Kingdom of the Netherlands. King William I, however, actually controlled the Grand Duchy as a province of the Netherlands. He therefore did not have a separate Grand Ducal coat of arms. Luxembourg had to be content to be confirmed in the use of the traditional coat of arms granted by letter dated 18 November 1818, albeit with the official addition of a ducal crown.

In 1830, Luxembourg joined the Belgian Revolt. Nine years later, the great powers decided to split the Grand Duchy. The Walloon part was incorporated into Belgium as the province of Luxembourg. A coat of arms for this part had already been adopted by the decree of the king of Belgium on 17 May 1837.

The eastern part remained in personnel union with the Netherlands but with a separate status. For this part, the coat of arms of 1818 was used , although the crown now had five leaves, four pearls and five arches. Presumably by Prince Henry, who ruled the Grand Duchy as a stadholder in the name of his brother, King William III, from 5 February 1850, two crowned lions were added to the coat of arms to make an achievement.

Until 1972 the country itself did not have official national arms. In practice the old arms from 1850 were used, but never formally adopted. The Grand-Dukes themselves used different variations of the Luxembourg arms with the arms of the House of Nassau. In 1972 also the difference between the great arms, the middle and the small arms were described.

The arms of the city of Luxembourg uses very similar arms, but with a different number of bars.