From Heraldry of the World
Your site history : Thingoe
Jump to navigation Jump to search 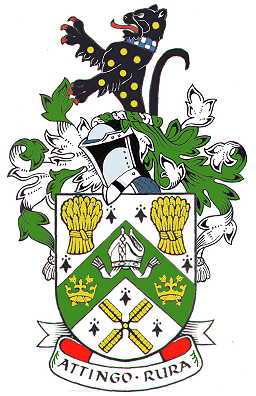 Arms : Ermine on a Chevron Vert between in chief two Garbs of Barley and in base the Sails of a Windmill saltirewise Or a Mitre Argent between two Ancient Crowns each enfiling as many Arrows points downward in saltire Gold.
Crest : On a Wreath Argent and Vert a demi Ounce Sable bezantée gorged with a Collar counter-company Argent and Azure.
Motto: 'ATTINGO RURA' - I manage the countryside

The arms were officially granted on February 20, 1958.

The green chevron represents the "Thing-hoe" or " assembly-hill" from which the ancient hundred and Rural District took their names. The white abbot's mitre and two of the gold crowns and arrows of St. Edmund, represent the ecclesiastical history of the district in its close association with Bury Abbey and Ixworth Priory. The two sheaves of barley are for the chief industry of the district, agriculture; this is further represented by the windmill sails in the base, alluding to familiar landmarks of this part of Suffolk, especially that at Pakenham. The ermine background is an allusion to the district's royal connections, including many royal visits during the Tudor and Stuart periods and in more recent times.