From Heraldry of the World
Your site history : Thompson Rivers University
Jump to navigation Jump to search 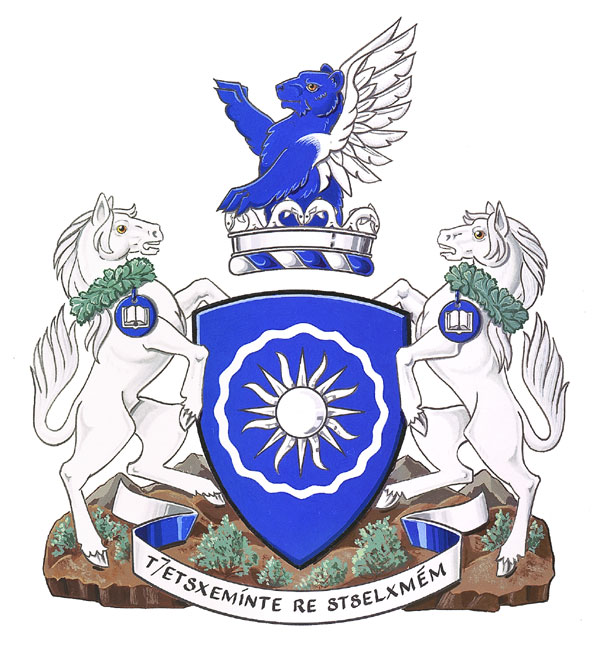 Arms : Azure a sun in splendour encircled by an annulus wavy Argent
Crest : A demi bear Azure winged Argent issuant from a coronet set with fish embowed respectant Argent
Supporters : Two horses Argent each gorged with a wreath of sage proper pendent therefrom a hurt charged with an open book Argent, standing on a mound of earth set with mountains and sage bushes proper
Motto: T7ETSXEMÍNTE RE STSELXMÉM

The arms were officially granted on April 1, 2005.

The blue field refers to the brilliant skies, lakes and rivers that envelop the region where Thompson Rivers University is located. The wavy circle around the sun represents the sacred circle of life, a central tenet in First Nations belief systems. It also stands for the never-ending character of learning. Lastly, the wavy feature of the circle recalls that the university is located near a junction of several water sources vital to the First Nations of the region. The sun is a symbol of light and learning, a principal endeavour behind academic institutions.

The coronet honours the indigenous peoples of the region by acknowledging the important role of fish as a food source and for recreational purposes in both their community and the community at large. The black bear, frequently seen on campus, represents strength, power and determination, qualities seen as vital to the success of Thompson Rivers University. Represented as a mythic creature, the winged bear allows for a further connection to the presence of migratory birds, thus suggesting perpetual striving for excellence across all faculties and programmes.

The mare and stallion symbolize grace, power and endurance which characterize the institution’s approach to learning and growth. They also refer to the major role horses played in the farming and ranching activities associated with this region both in the past and present. Their collars of sage are a reference to the distinctive local landscape. The medallions hanging from the collars feature open books and echo the motif of the active pursuit of knowledge. The mare and stallion stand on a representation of the local natural environment surrounding the university.

The motto “To strive ahead” in Shuswap, indicates that the journey of learning is enduring and unremitting.