From Heraldry of the World
Your site history : Thornaby-on-Tees
Jump to navigation Jump to search 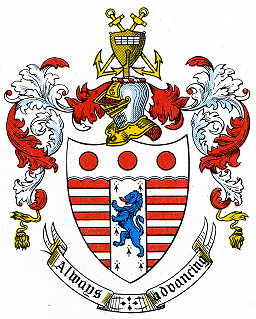 Arms : Barry of twelve Gules and Argent on a Pale Ermine a Lion rampant Azure on a Chief engrailed of the second three Torteaux.
Crest : On a Wreath of the Colours in front of two Anchors in saltire Or the Stern of a Ship with Rudder proper.
Motto: 'ALWAYS ADVANCING'

The ship and anchors refers to the area's maritime associations.