From Heraldry of the World
Your site history : Tipton
Jump to navigation Jump to search 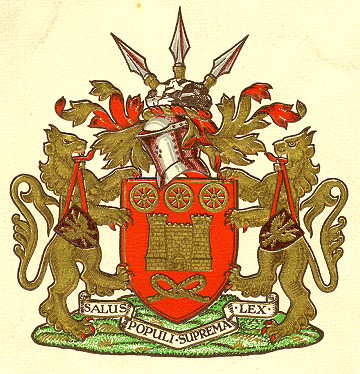 Arms : Gules a Port between two Towers between in chief three Wheels and in base a Stafford Knot all Or.
Crest : On a Wreath of the Colours a Rock issuing therefrom three Spearheads proper the hafts Or.
Supporters : On either side a Lion Or holding in the mouth a strap Gules pendent therefrom an Escutcheon Sable charged with a Thunderbolt Or.
Motto: 'SALUS POPULI SUPREMA LEX' - The welfare of the people is the highest law

The arms were officially granted on November 8, 1938.

The gold castle symbolizes the municipality and can also be interpreted as an allusion to nearby Dudley Castle. The Stafford knot indicates that Tipton was historically part of Staffordshire and the three gold wheels symbolise industry.

The spear-tips issuing from a piece of stone, allude to the earlier place-name, Tibbingstone, or Tipstone, found in the Domesday Book.

The black shields, held by the golden lions, are an allusion to the old coal mines which were responsible for the town's early growth, and are charged with thunderbolts, emblems of the modern electrical industry. The thunderbolts also serve as a reminder of Captain George Eyston's racing car, "Thunderbolt", which was built in Tipton and in 1938 set up a world land-speed record of 357 miles an hour.

Literature : Image and information provided by Jim Openshaw and from here