From Heraldry of the World
Your site history : Tiree
Jump to navigation Jump to search 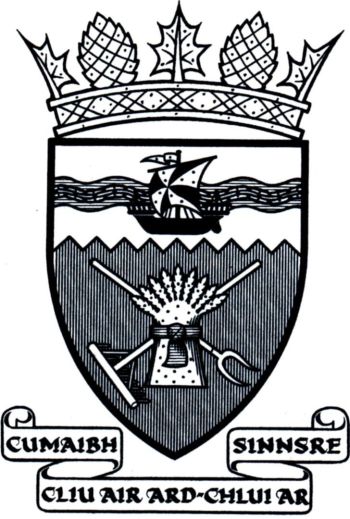 Gules, a pitchfork and hayrake heads downwards in saltire Argent, surmounted of a garb Or banded Azure, on a chief indented Argent a barrulet wavy Azure charged with a chain Or and surmounted of a galley Sable, the sail gyronny of eight Or and Sable, pennon Or.

Above the Shield is placed a Coronet appropriate to a statutory Community Council, videlicet:- a circlet richly chased from which are issuant four thistle leaves (one and two halves visible) and four pine cones (two visible) Or, and in an Escrol below the same this Motto "Cumaibh Cliu Air Ard-Chlui Ar Sinnsre".

The pitchfork, hayrake, and golden garb recall that Tiree was known as "the granary of Iona", while the indentations in the chief, with the wavy sea above, could recall the saying that Tiree is "the kingdom whose summits are lower than the waves".

The design of the chief was inspired by the desire to include something to commemorate the many emigrants who left Tiree for Canada at the time of the potato famines and also the close ties which still bind their descendants to the island. So we have a ship sailing across the ocean; it bears the arms of the Duke of Argyll, since the Duke of the time paid for the passages of three shiploads of emigrants to Canada. The gold chain represents the strong links which still bind the descendants of the exiles to their homeland.

The indentations allude to the fact that those leaving for Canada were wrenched from their homeland by circumstances completely beyond their control.

The Gaelic motto was chosen from several local suggestions and means "Have regard to the high reputation of your ancestors".