From Heraldry of the World
Your site history : Tobermory
Jump to navigation Jump to search 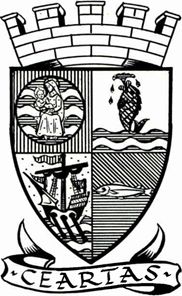 Quarterly: 1st, Gules, a fountain charged with a representation of the Blessed Virgin Mary with the Babe in her arms, Or; 2nd, Argent, on a base undy Azure and of the First, a dolphin hauriant Vert, lipped Gules, spouting forth water of the Second; 3rd, Or, upon the sea in base undy Azure and Argent, a lymphad Proper, oars in action, sails furled and tackling Sable, flagged Gules; 4th, per fess Vert and Azure, a salmon naiant Proper.

Below the Shield which is ensigned with a coronet appropri­ate to a Burgh is placed in an Escrol this Motto "Ceartas".

Tobermory was founded in 1788 by the British Society for extending the Fisheries and improving the Sea Coasts of the Kingdom. It became a Police Burgh in 1875.

The arms more or less repeat the device on the Burgh seal.

In the 1st quarter are the Virgin and Child in gold on a red field but within a fountain to recall that Tobermory means "the well of the Virgin Mary", while the other three quarters reflect the fishing and shipping interests of the town; the galley on the gold field in the 3rd quarter and the salmon in the 4th, come from the arms of Maclean of Duart, since Mull is mostly Maclean country and the use of the colour green in the 4th quarter is a reminder that Mull lay within the ancient Scottish Kingdom of Dalriada, with just a hint of the Mackinnons who once owned the north-western corner of the island.