From Heraldry of the World
Your site history : Todmorden
Jump to navigation Jump to search 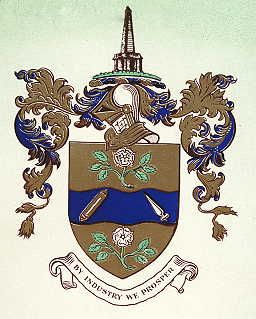 Arms : Or on a Fesse wavy Azure between a Rose Gules in chief and a Rose Argent in base both barbed and seeded slipped and leaved proper a Shuttle in bend sinister and a Spindle in bend of the fourth.
Crest : On a Wreath of the Colours upon a Mount Vert an Obelisk proper.
Motto: 'WE PROSPER BY INDUSTRY'.

The wavy fess represents the River Calder which, at the time the arms were granted, was the boundary between Yorkshire and Lancashire. The boundaries were later altered, and the area of the borough lies wholly in Yorkshire, but the red and white roses commemorate its former division between the two counties. The emblems on the fess stand for the textile industry.


The obelisk forming the crest represents Stoodley Pike, erected to mark the Peace of Amiens.

The current Town Council uses arms based on the old borough arms: 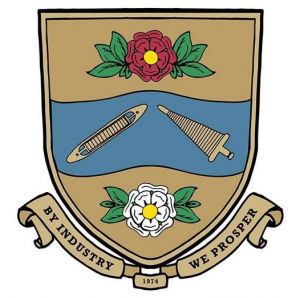