From Heraldry of the World
Your site history : Tollard Royal
Jump to navigation Jump to search 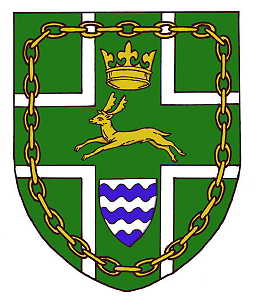 Vert a Cross Argent thereon another Cross also Vert charged with a Buck courant between in chief an Ancient Crown Or and in base an Escutcheon barry wavy of six Argent and Azure all within a Chain in orle also Or.

The arms were designed in 2014, but have not been officially granted.

The colours of green and white represent the chalk and downs of the local landscape, and more specifically to Cranborne Chase. They are also the predominate colours in the arms of Wiltshire County Council. The fallow buck represents the royal hunting forest and ties with the image on the logo of the Cranborne Chase AONB. The crown, in the style of Plantagenet kings, is to represent King John who used the area as a royal hunting ground. The white cross represents the church and the shield with wavy white and blue bars represents water, here specifically the village pond. The golden chain has double significance. Firstly a reference to the parish church's dedication to St. Peter ad Vincula ("St Peter in Chains"). Secondly the links represent the individual residents of the village working and forged together as a whole into a strong community.

Literature : Image and information from the designer of the arms Robert Young at http://www.civicheraldry.co.uk/