From Heraldry of the World
Your site history : Tonbridge and Malling
Jump to navigation Jump to search 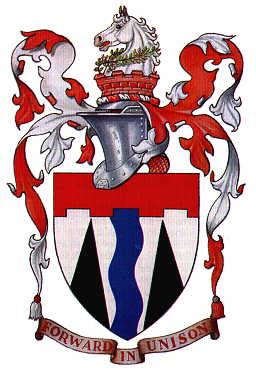 Arms : Argent a Pale wavy Azure between two Piles reversed Sable a Chief embattled Gules.
Crest : On a Wreath Argent and Gules issuing from the top of a Tower Gules a Horse's Head Argent gorged with two Garlands of Hops saltirewise proper.
Motto: 'FORWARD IN UNISON'

The blue pale and red chief together make a letter T, while the two black iles on white suggest a letter M. Thus the initial letters of the council's name are depicted. The embattled chief also represents the great bridge of Tonbridge, while the wavy pale shows the River Medway.

The crest wreath and mantling are in the red and white colours of Kent County Council. The crest shows the head of the famous white horse of Kent, wreathed with hop branches, traditional crop of the county. The tower from which the head rises stands for the district's many ancient monuments.