From Heraldry of the World
Your site history : Torbay
Jump to navigation Jump to search 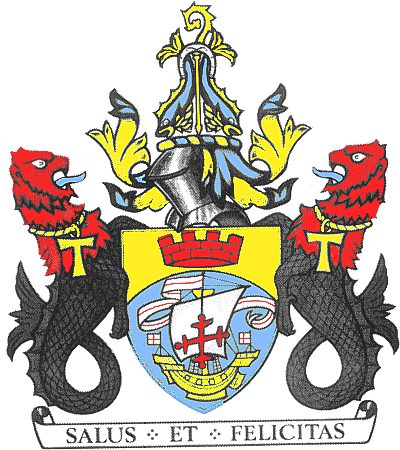 Arms : Azure a Lymphad Or flying Flags and Streamer of St. George sail argent pendent from the masthead by a Cable Or the Beams and Stocks of four Anchors conjoined in cross Gules on a Chief enarched Or a Mural Crown Gules.
Crest : On a Wreath of the Colours a Crosier erect Or between two Dolphins heads downward and outward Azure finned Or all enfiled through a Horseshoe Argent.
Supporters : On either side a Sea-Lion proper head and mane Gules and pendent from a Cable about the neck proper a Tau Cross Or.
Motto: 'SALUS ET FELICITAS' - Health and happiness

The arms are a simple map of Torbay, with the gold enarched chief representing the sandy beaches, and the blue field the sea. The ship represents the maritime interests of the borough. The St George's flag and streamers recall the area's historic links with the Royal Navy. From the masthead hangs a cross composed of the stocks of four anchors. This suggests the fusion of four maritime councils in one. Each of the arms of the cross resembles a letter T for "Torbay". On the chief is a mural crown, symbol of local government, and thus showing the Borough situated on Tor Bay. The crown is coloured red, the colour of Devon earth, and has four crenellations for the four old councils.

The blue and gold livery colours refer to the sea and sands of this seaside resort. Blue also featured in the arms or devices of Torquay, paignton and Brixham. These are also the livery colours of the arms of Nassau, commemorating the landing of William of Orange at Brixham, to become King William III.

Dolphins featured in the crests of both Paignton and Torquay, and are commonly found in the arms of seaside towns. The crosier is from the arms of Torre Abbey, and the horseshoe is taken from the Ferrers family arms and represents Churston Ferrers.

The motto is SALUBRITAS ET FELICITAS meaning Health and Happiness.