From Heraldry of the World
Your site history : Torquay
Jump to navigation Jump to search 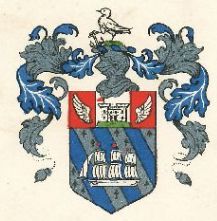 Arms : Ermine, three bends azure, and thereon a three-masted ship in full sail proper with flags gules; on a chief wavy gules two wings argent and between them a silver pale charged with a castellated gateway on a mound proper.
Crest : On a wreath argent and azure, a rock, and thereon a gull proper supporting an anchor sable with a gold cable.
Motto: 'SALUS ET FELICITAS' - Health and happiness

The arms were officially granted in 1893.

The wings appear to be derived from the arms of the Ridgeway family, Earls of Londonderry, who held the Manor of Tor Mohun on which the sea-side resort was largely built. In 1876 the Local Board of Health obtained the sanction of Government to alter the name of the district from Tormoham to Torquay. The gateway refers to that of Torre Abbey and the other emblems represent the town's historic naval and maritime associations.