From Heraldry of the World
Your site history : Totnes
Jump to navigation Jump to search 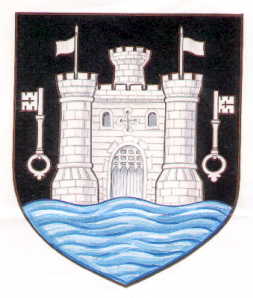 Sable upon Water in base Azure and between two Keys wards upward and outward a triple towered Castle the Portcullis raised and upon each outer tower a Banner all Argent.

The arms were historically recorded during the Visitation of 1572 for the Borough of Totnes. Transferred to the town council on April 16, 1975.

The device is a water gatehouse and seems to indicate the pride of the burgesses in the ancient importance of the Borough as a royal fortress.

The Castle was founded by one Juhell, a Breton, shortly after the Norman Conquest.

Literature : Image and information send to me by mail