From Heraldry of the World
Your site history : Tottenham
Jump to navigation Jump to search 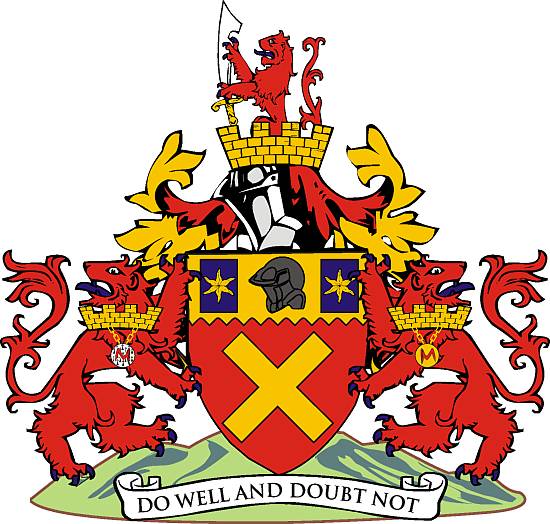 Arms : Gules a Saltire couped Or on a Chief indented of the last a Helm Sable between two Billets Azure each charged with an Estoile of the second.
Crest : Issuant from a Mural Crown Or a demi Lion Gules supporting a Seax Argent pomelled and hilted Gold.
Supporters : On either side a Lion reguardant Gules gorged with a Mural Crown pendant therefrom by a Chain Or a Roundel the dexter Ermine and the sinister Gold charged with a Maunch also Gules.
Motto: 'DO WELL AND DOUBT NOT'

The arms were officially granted on September 13, 1934.

The Manor of Tottenham, held by Earl Waltheof before the Norman Conquest, passed by his daughter's marriage to David, Earl of Huntingdon, son of King Macolm III of Scotland, and descended to William the Lion, King of Scotland. This connection with the realm of Scotland is indicated by the red lions. The Manor was next granted to William the Lion's brother, and was eventually divided between three co-heirs, Robert de Bruce, John de Baliol, and Henry de Hastings. These are represented in the arms - Bruce by the saltire and chief, Baliol by the ermine, and Hastings by the maunch or sleeve.

The stars, placed on billets (representing tiles or bricks), are from the arms of Sarah, Duchess of Somerset, founder of Tottenham Grammar School, and the helm is from those of Compton, Lord of the Manor in the sixteenth century.

The crest is identical with that borne by the former Urban District Council above a shield bearing crossed swords and a hurst of seven elm-trees (the 'seven sisters'), with the motto, 'Steadfast in difficulties'.