From Heraldry of the World
Your site history : Trafford
Jump to navigation Jump to search 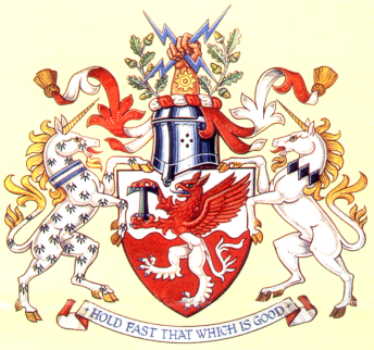 Arms : Per fess wavy Argent and Gules a Griffin segreant counter-changed holding between the foreclaws a Tau Cross per pale Vert and Sable.
Crest : On a Wreath of the Colours between two Sprigs of Oak fructed a dexter Cubit Arm proper charged with a cogwheel Or the hand holding two Flashes of Lightning in saltire Azure.
Supporters : On either side a Unicorn that on the dexter Ermine armed crined tufted and unguled Or and gorged with a Collar Azure charged with a Bar Argent that on the sinister Argent armed crined tufted and unguled Or and charged on the neck with three Lozenges conjoined in fess Sable.
Motto: 'HOLD FAST THAT WHICH IS GOOD'

The Crest wreath is in the Trafford colours of red and white. In the crest is a raised forearm holding two shafts of blue lightning to symbolise Trafford's large electrical industry, and set in the shape of an X (saltire) to represent the Roman number 10, representing the 10 communities which make up the Metropolitan Borough. The arm is also charged with a gold cogwheel taken from the Altrincham Arms to represent engineering.

The two branches of oak are taken from the Urmston Arms to represent the wooded countryside in that area. The two supporting creatures are both (unusually) unicorns. The one side is a pure white unicorn taken from the Sale Arms, and another is ermine as in the Altrincham Arms. The latter wears a blue and white barred collar from part of Bowden's Crest. The white unicorn is derived from the crest of the Carringtons, kinsmen of the Masseys of Sale, whose three black diamonds (or lozenges) are seen in both the Sale and Carrington families' shields.

Thus the new arms incorporate elements and insignia taken from historic town's Arms and represents all of the local communities which were combined to make Trafford Metropolitan Borough.