From Heraldry of the World
Your site history : Tranent and Elphinstone
Jump to navigation Jump to search 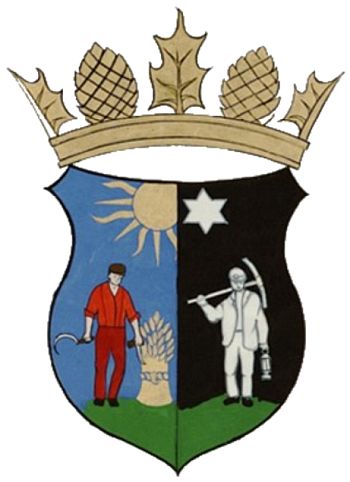 Per pale, dexter, Azure, a sun Or issuant from the sinister chief and on a mound Vert the figure of a farm servant Proper habited Gules, holding in the dexter hand a sickle, and in the sinister hand a cleek Proper attached to a garb paleways Or; sinister, Sable, on a mount Vert the figure of a miner supporting on the shoulder with the dexter hand a miner's pick-axe and holding in the sinister hand a miner's lamp all Argent, and in the dexter chief point a star of six points of the Last.
Above the Shield is placed a Coronet appropriate to a statutory Community Council, videlicet:- a circlet richly chased from which are issuant four thistle leaves (one and two halves visible) and four pine cones (two visible) Or.

The arms, which reflect the device on the Tranent burgh seal, make direct reference to the close local connections with agriculture and coal-mining. The dexter half shows a farm worker harvesting by day in the sunshine; the sinister half has a coal-miner going on night shift by the light of the stars.