From Heraldry of the World
Your site history : Tsumeb
Jump to navigation Jump to search 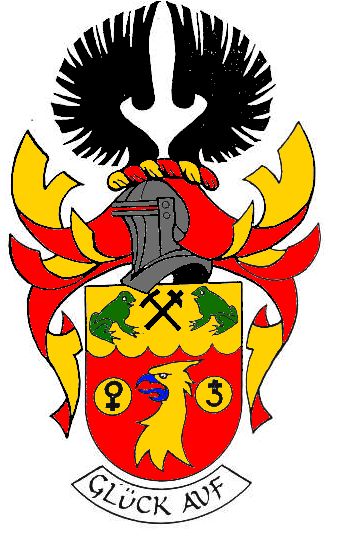 ARMS: Gules, an eagle' head erased Or, beaked and langued Azure, between two bezants, the dexter charged with the mineralogical symbol for copper and the sinister charged with the mineralogical symbol for lead, Sable; on a chief invected Or, a pair of mine hammers saltirewise, handles downward, between two frogs sejant repectant proper
CREST: A pair of wings Sable
WREATH: Or and Gules
MOTTO: GLÜCK AUF (May God be with you when you go underground).

The name Tsumeb is derived from Soomep, which describes green copper ore,which is still mined in the area, hence the tools in the upper part. The lower part also shows the mineral symbols of lead and copper. I have no meaning for the eagle and frogs.