From Heraldry of the World
Your site history : Tuvalu
Jump to navigation Jump to search

There are 9 districts in Tuvalu, each consisting of one or more islands. None of the districts or villages does use arms, neither does the capital Funafuti.

The National Arms of Tuvalu 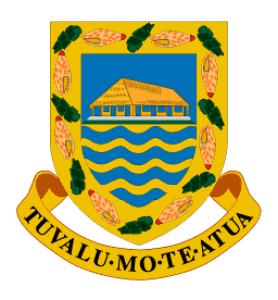 The arms show a traditional house, used for large gatherings in the different islands, and the house thus symbolises the autonomy of the local councils. The lower half indicates the dependence of the islands on the sea. The bordure shows a banana leaves, one for each of the (continuously) inhabited islands, and symbolise the rich vegetation. The shells symbolise the riches of the sea.