From Heraldry of the World
Your site history : USCGC Barbara Mabrity (WLM-559)
Jump to navigation Jump to search 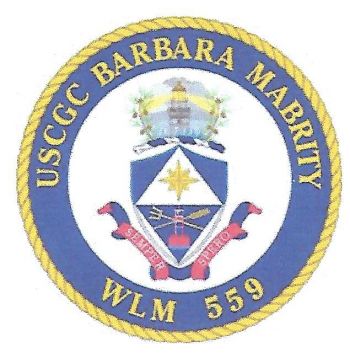 Shield: Per fess Azure and Argent, a lozenge in point counterchanged, in chief a polestar Or and in base a trident of the like and an oar saltirewise Proper surmounted by a bout Gules garnished Argent supported by an ocean Celeste.
Crest: From a wreath Argent and Azure, in front of a bank of storm clouds and issuing from stylized ocean waves Azure capped Argent, a lighthouse Proper lighted Or, emitting two beams of light to dexter and sinister, all between two branches of southern longleaf pine Proper.
Motto: A scroll Gules doubled Azure inscribed SEMPER SPERO (Always hopeful) Argent.


Seal: The coat of arms as blazoned in full color on a white disc enclosed by a dark blue border edged on the outer side with a gold rope and inscribed "USCGC BARBARA MABRITY" above and "WLM 559" below in gold.

Red, white and blue are the colour traditionally used by the US Coast Guard. The lozenge, heraldic symbol for womanhood, signifies Mrs. Barbara Mabirty, the 19th century lighthouse keeper at Key West for 38 years. The polestad represents the cutter's navigational services. The trident symbolises the cutter's mission of marine enviromental protection and maritime law enforcement, while the oar symbolise the search and rescue mission. The bouy highlights the operational duties as the ninth vessel of the Keeper Class Coastal Bouytenders. The storm clouds, lighthouse and ocean waves denote the most destructive hurricane of Key West's History. That storm in 1846, sank three ships and destroyed the Lighthouse, killing fourteen people taking refuge there. The beems represents Mrs. Mabrity's dedication to service "maintaining the light", she retired in 1964 at the age of 82. The branches of Southern longleaf Pines, the state tree of Alabama, symbolise the location of the cutter.