From Heraldry of the World
Your site history : USCGC Harry Claiborne (WLM-561)
Jump to navigation Jump to search 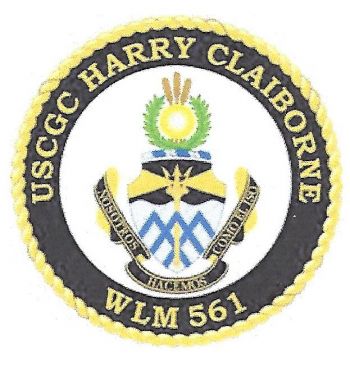 
Seal: The coat of arms in full color as in hte blazon, all upon a white disc and enclosed and enclosed within a dark blue border edged on the outside with a gold rope and bearing the inscription "USCGC Harry Claiborne" at top and "WLM 561" below in gold.

The Silver field with a black chief alludes to the Arms of the Claiborne Family, which feature a field Argent with a chief Sable. The gold piles on the chief symbolises the beams of a Lighthouse, and Harry Claiborne's career as Keeper of Bolivar Point and Pass a I'Outre Lighthouses. They also symbolise the searchlights of the Ship's search and rescue mission. The Chevronels from the Claiborne Family denotes martime environmental protection, aids to navigation and domestic icebreaking. The Trident symbolise authority at Sea. The Oars symbolise Claiborne's work in rescuing and sheltering the storm victims in the Galveston Area during the Hurricanes of 1900 and 1915. The concentric prisms symbolise both the Lighthouse lantern and the cyclotronic Hurricanes which devastated Galveston. The Wreath symbolise Harry Claiborne's efforts throughout his career to save lives,