From Heraldry of the World
Your site history : USCGC Maria Bray (WLM-562)
Jump to navigation Jump to search 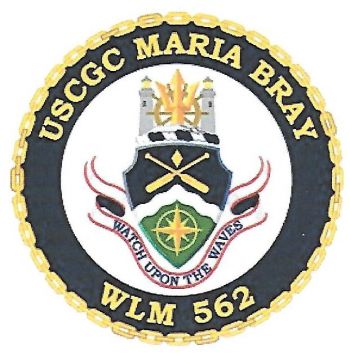 Shield: Per chevron Azure and Vert a chevronel wavy Argent between in chief a lozenge above two oars blades downwards slatirewise and in base a compass rose Or.
Crest: From a wreath Argent and Azure a ship's wheel between two lighthouses with lanterns lit upon a rocky mount Proper, surmounted at center by a demi-trident Or.
Motto: A scroll Argent edged Gules doubled Azure inscribed "WATCH UPON THE WAVES" (Ready for Everything) Azure.


Seal: The coat of arms as blazoned in full color on a white disc enclused by a dark blue border edged on the outside with a gold chain and inscribed "USCGC MARIA BRAY" above and "WLM 562" below in gold.

The Green field indicate Cape Ann and Thacher Island, site of the twin Lighthouses and Maria Bray's heroic action. The oars symbolises the life-saving mission of Lighthouses and WLM 562, whose namesake is recalled by the lozenge heraldic device of women. Navigation and command of coastal waters are referred to by the compass rose. The Thacher Island lights are represented by the twin Lighthouses. The ships' wheel symbolises navigation. The Trident symbolises authority and maritime capabilities; the three tines recall the period of three nights during which Maria Bray tended the lights in her husband's absence, covering the distance between the towers in severe storm conditions with only the aid of her twelve-year-old nephew.