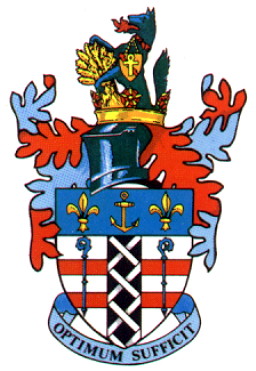 Arms : Argent two Bars Gules a Pale Sable fretty of the first between two Abbots' Crosiers addorsed also Sable on a Chief Azure an Anchor between two Fleurs-de-Lys Or.
Crest : Out of a Coronet composed of four Roses Gules barbed and seeded proper set upon a Rim Or a demi Wolf Sable breathing Flames and gorged with a Leather Collar proper buckled and pendent therefrom by a Chain an Escutcheon Gold charged with a Ray of Lightning throughout in bend also Gules surmounted of an Ankh Vert and supporting a Garb also Gold; Mantled Gules doubled Argent
Motto: 'OPTIMUM SUFFICIT' - Only the best is enough

The arms were officially granted on December 1, 1955.

The red roses are for Lancashire, the town having formerly been in that county, and the black wolf refers to name of the town " Wulf-heres-tun ".
The other emblems are for local industries; the agricultural market is symbolised by the gold sheaf, the flames are for the formerly important iron-smelting, the leather collar represents the tanning industry, the chain hanging from it is for the engineering industry, and supports a gold shield carrying a red lightning flash for the electrical industry and the Egyptian Ankh or Cross of Life, in green, for the antibiotic manufacturing activities.

The motto is based on that of the Barrow family 'PARUM SUFFICIT' - a little is enough.