From Heraldry of the World
Your site history : University of Alberta
Jump to navigation Jump to search 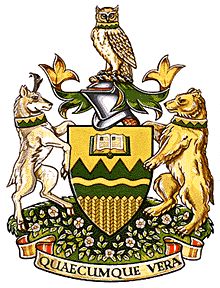 The arms are a representation of the topography of Alberta rendered in the colours of the University. At the base is a prairie wheat field symbolizing Alberta's agricultural industry. The wavy gold line above suggests the hills and rivers of Alberta and, in particular, the setting of the University campus. The top of the shield is in gold and separated from the rest of the shield by a line suggesting the Rocky Mountains. The book of learning dominates the design.

The crest shows a Great Horned Owl, the provincial bird and an accepted symbol of knowledge.

The supporters are a Pronghorn, taken from the Provincial Coat of Arms, and a golden bear, mascot of the University. Both wear collars of the University colours, as does the owl. They stand on a compartment of a grassy mound with wild roses, the floral emblem of Alberta.