From Heraldry of the World
Your site history : Upton upon Severn
Jump to navigation Jump to search 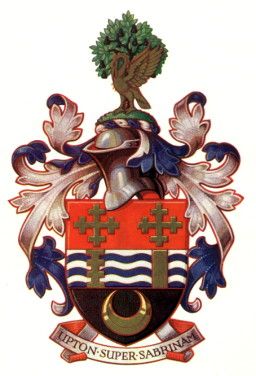 Arms : Per fesse Gules and Sable on a Fesse barry wavy of six Argent and Azure between in chief two Cross Crosslets and in base a Crescent Or two Pallets that to the dexter embattled counter-embattled of the last.
Crest : On a Wreath Argent and Azure On a Mount Vert in front of a Pear Tree proper fructed Sable a Pelican Or vulning herself Gules.
Motto: 'UPTON SUPER SABRINAM'.

The arms were officially granted on November 18, 1948.

The pelican in its piety is from the crest of the Lechmeres of Hanley Castle, and the pear tree is taken from the arms of Worcestershire.

Literature : Scott-Giles, 1953 and image from here