From Heraldry of the World
Your site history : Urmston
Jump to navigation Jump to search 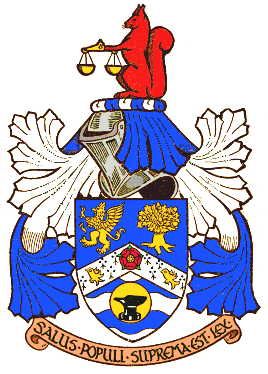 Arms :Per chevron Azure and barry wavy Argent and of the first on a Chevron Ermine between in chief a Griffin segreant and an Oak Tree eradicated Or and in base a Bezant charged with an Anvil Sable a Rose Gules barbed and seeded proper between two Martlets also Or.
Crest : On a Wreath of the Colours a Squirrel sejant proper holding with the forepaws a Balance Or.
Motto: 'SALUS POPULI SUPREMA EST LEX' - The welfare of the people is the highest law

The chevron and martlets are from the heraldry of the local families of Ashawe and Hyde, and the griffin, with a change in colour, is from the arms of the de Traffords. The oak tree alludes to the preservation of the rural aspect of the area, while the anvil and waves refer to industry, the River Mersey and the Ship Canal.

The squirrel is taken from the arms of the De Orneston family and the balance is an emblem of St. Michael, to whom the parish church is dedicated.