From Heraldry of the World
Your site history : Västmanland
Jump to navigation Jump to search 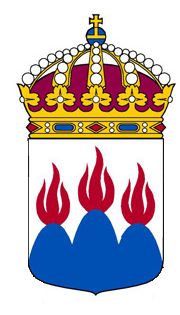 The arms were used for the province at the funeral procession of King Gustav Vasa in 1560. The 1560 shield showed one 'volcano' probably indicating the Sala silver mines and melting ovens, which made the province quite rich at the time.

In the early 17th century the arms showed three mountains for the mines of Sala, Norberg and Skinskatteberg.