From Heraldry of the World
Your site history : Vaud
Jump to navigation Jump to search 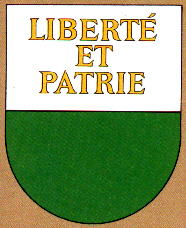 Vaud (Waadt in German) was a territory that was gradually acquired by the Counts of the Savoie between 1240 and 1260. The Counts were the first to use separate arms for the newly conquered territory. The arms showed the Imperial eagle, as the area officially still belonged to the German Empire. To distinguish the arms they added a red label, see below.

The area was ruled by a separate branch of the House of Savoie since 1260. Ludwig II, Lord of Vaud from 1302-1348 changed the arms in 1306, by adding a barred fess to the arms of Savoie. After his death the area was again directly ruled by the Counts of Savoie, but the new arms remained.

The arms remained unchanged until the beginning of the 16th century. The new arms, which are known from a stained glass from 1530 in the church of Bourg-en-Bresse in France, show a simple black tree-topped mountain. After the conquest of the area by the city of Bern in 1536, the black mountain was added to the arms of the, since 1416, Dukes of Savoie, as a symbol of their claim to the area.

During the reign of Bern, until 1798, the area did not have its own arms. The territory was divided in districts, as in the other areas of the Canton of Bern. The combined districts of Vaud, however, seem to have used complicated arms, which were seen on a banner, dating from between 1680 and 1740. The arms show 6 fields, in the first the arms of Bern, the other five of the local districts : Iverdon, Nyon, Lausanne, Morges and Romainmôtier.

In January 1798 Vaud proclaimed itself an independent republic, similar to the new French republic. Later that year the new republic joined the Helvetian Republic. The Helvetian Republic did not use arms. In 1803 the use of arms was again permitted and the new Canton Vaud decided to devise new arms. The new arms were adopted on April 17, 1803, and are nearly identical to the present arms. The official description mentions the green colour on top and the white below. The original drawing, however, shows the green below and the white on top. The colour of the letters was not described, but the motto was shown in black. Later in the 19th century the gold lettering became more common.
In 1806 the arms were augmented with liberation symbols, cannons and other military equipment. These augmentations lasted for about 10 years and are no longer used.