From Heraldry of the World
Your site history : Viechtach
Jump to navigation Jump to search 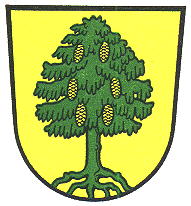 The arms were officially granted in 1437 by Duke Enrst of Bayern. The arms show a canting Fichte (pine tree), and they already appeared on the oldest known seal, dating from 1514. All later seals and images have shown a pine tree, but the size and shape varied widely. The pine cones were added in the late 19th century. Also in the 19th century a chief with the arms of Bayern was sometimes used, probably to distinguish the arms from similar arms with pine trees.