From Heraldry of the World
Your site history : Vincent DePaul Breen
Jump to navigation Jump to search 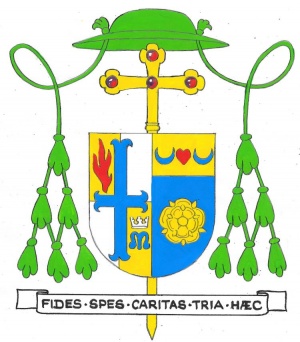 As common in US episcopal heraldry, the arms show the arms of the diocese impaled with the personal arms of the bishop.

The rose, long a symbol of the Pro-Life Movement, alludes to this work to which the bishop devoted much of his priestly life and ministry. On a gold chief there is a red heart, the symbol of charity. This refers to the apostle of charity and the bishop's patron saint, Vincent de Paul. This heart is flanked by two blue crescents. This alludes to St. Mary under the title of the Immaculate Conception which is the patroness of the United States of America and of the diocese of Brooklyn.

The achievement is completed with the heraldic insignia of a prelate of the rank of bishop by instruction of the Holy See, of March 1969, confirmed in March 2001.