From Heraldry of the World
Your site history : Vincent Mduduzi Zungu
Jump to navigation Jump to search 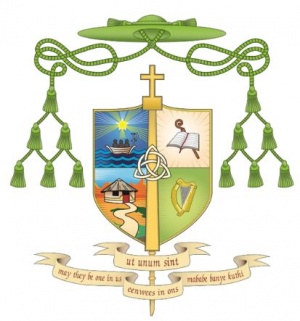 The pile extending over the shield is the ‘Diaz cross’ or Padrao. It represents the earliest known contact of Christianity with this Southern part of Africa. It recalls the Portuguese explorer Bartholomew Diaz who landed just east of Algoa Bay at Kwaaihoek in March 1488 and planted the Padrao cross on African soil in honour of the Christian faith. The 1st Mass may have been celebrated as well.

The first quarter shows the Star of the Sea representing the Blessed Virgin Mary, the principal Patroness of the Diocese, invoked under the title of ‘Our Lady of the Flight into Egypt’ which is traditionally celebrated every year in February.

The second quarter shows a crosier, recalling the principal ministry for a bishop as shepherd. He must know his sheep so well that he “has the smell of their odour” as Pope Francis said on one occasion. The open book represents the Word of God, which is the source of life and the highest authority of the Church and the diocese.

The third quarter is a setting of an African home along the coast, surrounded by hills and green pastures, with a wide country road leading straight home. The home represents African values of family, such as, love, joy, celebration, compassion, respect, inter-generational solidarity, hospitality, warmth, identity, belonging, reconciliation etc. encapsulated in the belief system of “Ubuntu” (‘humane-ness’). A home is a sacred place where our first encounter with God is realized in the heart of the family. The Catholic Church sees itself as ‘Family of God in Africa’ where people of different languages and cultures are made to ‘feel at home’.

The fourth quarter shows a golden harp representative of the faith of the Irish missionaries who came to our land, Diocesan and Religious, as well as male and female. Their spiritual, human and material contribution in the life of the local Church is immense. It is by no coincidence that the second Patron of the Diocese after the Blessed Virgin Mary is St Patrick. They are a constant reminder that the Church is by nature missionary, that is the purpose for which it was founded and the reason for which it continues to exist. It is here to evangelise.

All these old and new Christian traditions and symbols representing the rich cultural and linguistic diversity of the territory of the Diocese find their meaning, integration and unity in the life of God revealed by Jesus as the Divine Family of the Father, the Son and the Holy Spirit. The interwoven ‘Celtic rings’ in the centre of the shield represent the Most Holy Trinity, the founding principle of our Christian faith.

The Bishop’s motto: “ut unum sint” (Latin), “may they be one in us” (English), “eenwees in ons” (Afrikaans) and “mababe banye kuthi” (Xhosa), is taken from what has become known as the priestly prayer of Jesus recorded in the Gospel of John Chapter 17 verse 21.