From Heraldry of the World
Your site history : Volksrust
Jump to navigation Jump to search 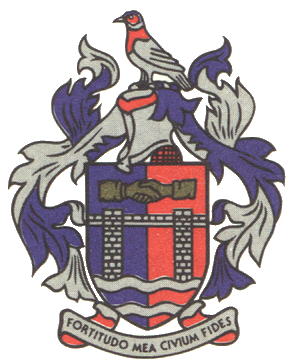 The shield tells a story about the Third Swaziland Convention, signed in December 1894 by President Paul Kruger and the British High Commissioner, Sir Henry Loch. Neither of them was willing to negotiate on the other's territory, so the railway bridge over the Grensspruit (border stream), marking the border between the Zuid-Afrikaansche Republiek (ZAR) and Natal, was chosen as a neutral venue. A railway coach was placed in the middle of the bridge (today called the Convention Bridge), straddling the middle of the stream. The two statesmen could then sit at the conference table, each on his own soil. The bridge was proclaimed a historical monument in 1954. The wavy barrulets symbolise the stream. The clasped hands symbolise Kruger and Loch and the agreement they reached over the future of Swaziland. That state became a protectorate under the auspices of both the ZAR and Britain. Britain became the sole protector in 1900, following the annexation of the ZAR.