From Heraldry of the World
Your site history : Wednesfield
Jump to navigation Jump to search 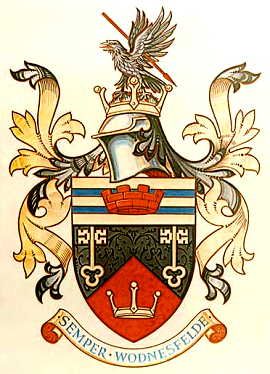 Arms : Per chevron Sable and Gules in chief two double-warded Keys wards upwards in base a Saxon Crown Or on a Chief Or two Barrulets Azure surmounted of a Mural Crown Gules.
Crest : Issuant from a Saxon Crown Or a Mount Vert thereon a Raven Sable wings addorsed and transfixed in bend by a Spear head downward Gules; Mantled Sable doubled Or.
Motto: 'SEMPER WODNESFELDE' - Wednesfield forever.

The gold Saxon crown alludes to the victory of the Saxons, led by Edward the Elder, over the Danes in 910 AD and the red field is doubtless indended to represent the bloody nature of the battlefield. The Saxons named the area where the battle took place "Woden's field" in honour of their god of war and the height of the battle was depicted on the Council's former seal.

The two golden keys symbolise the lock-making industry which played an important role in Wednesfield's development in the nineteenth and twentieth centuries. The red mural crown is a common symbol of civic government and the two blue bars represent the Wyrley and Essington Canal, which runs through the town.

The raven, being an emblem of the Danes, transfixed by a spear is a further reference to the battle and the Saxon victory.