From Heraldry of the World
Your site history : Wellington (Western Cape)
Jump to navigation Jump to search 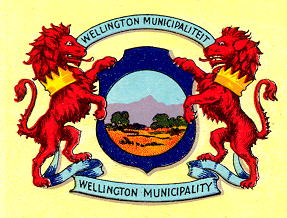 These "arms", which depict a local landscape, were replaced in 1973 by proper heraldic arms (of which I have no image): Per chevron Argent and Azure, in chief two hurts each charged with a fleur de lis Or, in base a Huguenot cross Argent. Blue and white are the traditional colours of the Western Cape, and the charges on the shield allude to the 17th-century French Huguenots who settled in the area.