From Heraldry of the World
Your site history : Western Cape
Jump to navigation Jump to search 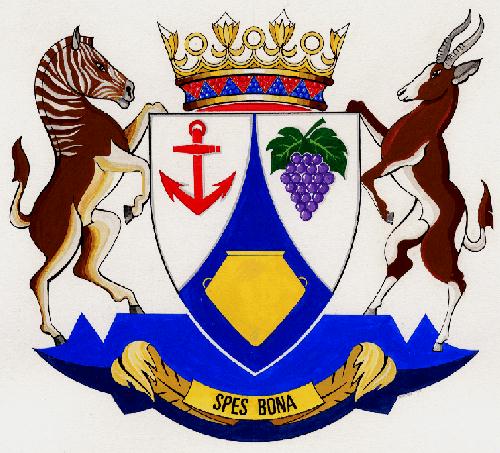 The idea of a coat of arms for the Western Cape originated in 1994 when the late Dr Cor Pama, a renowned heraldic expert, was requested to draft proposals. He unfortunately passed away prior to completing the project.

The designs were, however, referred to the various political parties in 1995 for discussion and presented to Mr Brownell, the State Herald, at the end of last year. He then designed the coat of arms, which has been unanimously approved by all the political parties.

The design endeavours to encapsulate the elements which enjoy the widest support, but simple enough to allow the successful reduction to the size of a postage stamp, without the loss of significant detail.

The anchor in the shield enjoys unanimous support as a symbol of hope, stability and faith amongst those who have considered the coat of arms. It also alludes to the maritime history and riches of the Western Cape.
The grapes allude to the importance of agriculture, more specifically the importance of the province as an important wine-producing area.
The clay pot in the base of the shield refers to the manufacturing sector and incorporates an artefact created by the earliest inhabitants of the province. The pot is of Khoi origin and comes from Ceres. It has a distinctive shape, having been in use in sandy conditions, and is thus an appropriate symbol.

The Quagga (Equus quagga quagga) and the Bontebok (Damaliscus dorcas dorcas) support the shield. The former, though now extinct, is now the subject of a specialised breeding programme, which hopes to produce a close replica of this animal, while the latter which was saved from the brink of extinction, is unique to the Western Cape. The two animals stand on a base in the form of a stylised Table Mountain, the Western Cape's most distinctive natural feature. Resting on the upper rim of the shield is a distinctive "coronet" comprising a beaded headring (found inter alia as a form of ornamentation among the San), heightened with alternating protea flower heads and rings.

The ribbon beneath the shield, in the form of ostrich feathers, contains the motto, Spes Bona (Good Hope), which enjoys widespread support.