From Heraldry of the World
Your site history : Whitley Bay
Jump to navigation Jump to search 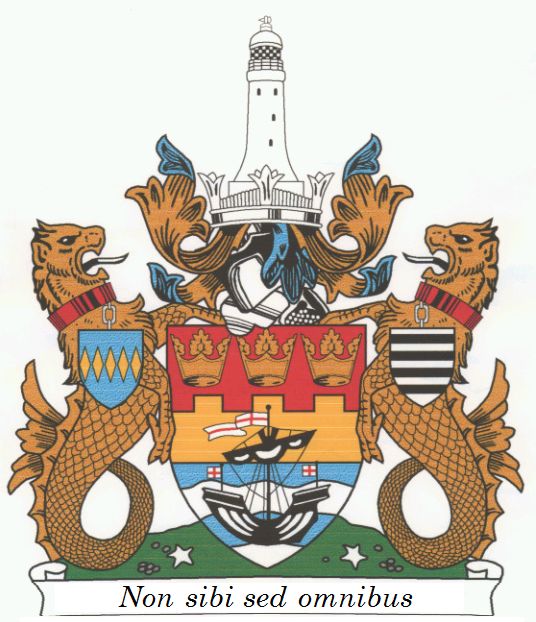 Arms : Per fesse gules and barry wavy azure and argent, a fesse embattled Or; in chief three ducal coronets of the last and in base over all a lymphad, sail furled, sable with pennon and flags flying of the Arms of St. George.
Crest: Out of a coronet of four lily flowers set upon a rim argent, a mount vert, thereon a representation of the lighthouse of St. Mary's Island proper. Mantled azure, doubled Or.
Supporters: On either side a sea lion proper, head and mane Or, each gorged with a collar compony gold and gules, pendent . therefrom by a link vert an escutcheon, that on the dexter Azure five lozenges conjoined in fess Or, that on the sinister Ermine two bars vert.
Motto: Non sibi sed omnibus.

The shield includes gold for the sands, blue and white waves for the sea an ancient ship in black (flying flags of St. George) for the former shipbuilding and coal export trades, and three golden crowns on red from the arms of Tynemouth Priory, which held the manor in pre-Reformation days.

The crenellation commemorates the Whitleys, who took their name from the ancient town and had a licence to crenellate their residence.

The crest consists of a crown of lilies (unique in civic heraldry), the rim and lilies both white, representing the Island Chapel of St. Mary; and St. Mary's Lighthouse on a green hillock. The sea-lions are marine versions of the Northumberland County Council's lion supporters, and from their collars, of the alternate red and gold of Northumberland's shield, hang by green links (an allusion to the links along the shore) shields of the Percys, former Earls of Northumberland and the Delavals of Seaton Delaval.

The sea-lions stand upon a compartment of sand.

The motto means, "Not for oneself, but for all."