From Heraldry of the World
Your site history : Winchester RDC
Jump to navigation Jump to search 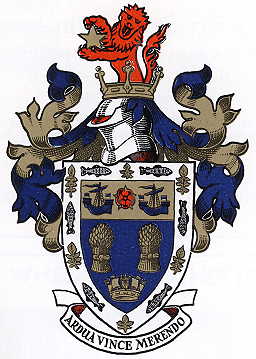 Arms : Azure two Garbs and in base a Naval Crown Or on a Chief of the last a Rose Gules barbed and seeded proper between two Lymphads of the first all within a Bordure Argent charged with six Trout naiant pursuant from the dexter Sable alternating with as many Slips of Watercress also proper.
Crest : Issuant from a Saxon Crown Or a demi Lion guardant Gules holdong in the paws a Mullet Gold.
Motto: 'ARDUA VINCE MERENDO' - Overcome difficulties by service.

The two sheaves of corn represent agriculture and the naval crown symbolises the Naval Station in the District. The Hampshire Rose refers to the County and the two ships represent the ship building and yachting activities in the South of the District. The border represents the River Itchen, a beautiful waterway flowing through the District, with its trout, and watercress industry established in its upper reaches.

In the Crest there is the English Lion rising from King Alfred's Saxon Crown, it holds a five pointed star representing the five principal Committees through which the Council carries out its work.