From Heraldry of the World
Your site history : Windsor and Maidenhead
Jump to navigation Jump to search 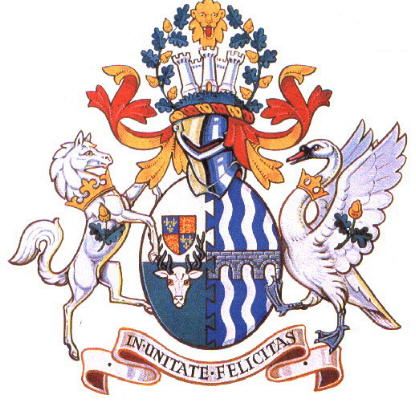 The shield combines the arms of the two merged boroughs. On the dexter side are charges from the arms of New Windsor. White and green are the livery colours of the Tudor dynasty. The stag's head is for Windsor Great Forest. Between the stag's antlers are the Royal arms as used between 1405 and 1603.

The sinister side uses charges from the arms of Maidenhead. It shows the town's bridge over the River Thames. The two sides of the shield are dovetailed together to show the two boroughs united.

The crest represents Windsor Castle, with the royal lion's face above it, and the forests and parklands that surround it suggested by the oak branches.

The dexter supporter is a horse, suggesting the race course at Ascot. A horse was also one of the supporters of Berkshire County Council's arms. The sinister supporter is a swan for the River Thames and the parts of Buckinghamshire brought into the borough. Ancient crowns and acorns have been added to difference the supporters.