From Heraldry of the World
Your site history : Worcester (Western Cape)
Jump to navigation Jump to search 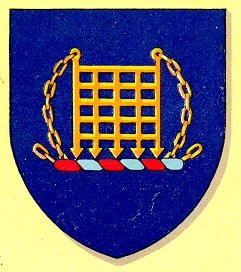 The town was founded by governor Lord Charles Somerset, who named it after his brother, the Marquess of Worcester. The portcullis is the crest of the family arms (see also the arms of Beaufort West, named after their father, the Duke of Beaufort).

The municipal arms were replaced in the 1950s or '60s by the following: Quarterly Sable and Gules, a portcullis chained Or nailed Azure, on a chief wavy Argent three hurts each charged with a fleur de lis Or.
I have no image of those arms. Any image is welcome !