From Heraldry of the World
Your site history : Worksop
Jump to navigation Jump to search 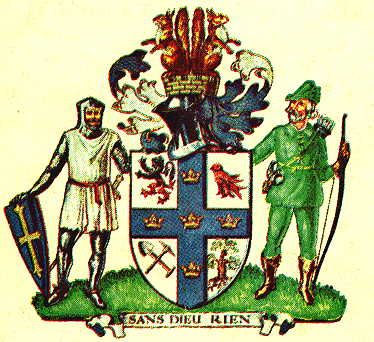 Arms : Argent on a Cross Azure between in the first quarter a Lion rampant per fesse Sable and Gules in the second quarter a Martlet of the last in the third quarter a Miner's Shovel and Pick in saltire proper and in the fourth quarter an Oak Tree eradicated also proper five Ducal Coronets Or.
Crest : On a Mural Crown Or two Squirrels sejant addorsed proper.
Supporters : On the dexter side a Knight in armour proper supporting with the exterior hand a Shield Azure thereon a Cross flory Or and on the sinister side a Man habited as a Forester supporting with the exterior hand a Longbow proper.
Motto: 'SANS DIEU RIEN' - Nothing without God.

The ducal coronets represent the five principal landowners in the 'Dukeries'. The lion rampant is from the arms of Worksop Priory, founded by a member of the Lovetoft family whose arms embodied a similar lion but with the tinctures reversed. The martlet is from the arms of the old Worksop family of Furnival, some members of which took part in the Crusades. The pick and shovel refers to the coal-mining industry and the tree depicts the Shire Oak, which was at one time situated at the junction of Nottinghamshire, Derbyshire, and Yorkshire, having a bough in each of these counties.

The mural crown is a symbol of municipal government and the squirrels are from the arms of the first Mayor of Worksop, Mr C. A. Longbottom.

The knight is a further reference to the Furnival family, and is depicted in the armour of the crusading period. The cross on the knight's shield is that of St Cuthbert, to whom the Priory and Worksop College are dedicated. The forester denotes Sherwood, part of which lies within the Borough.