From Heraldry of the World
Your site history : Wychavon
Jump to navigation Jump to search 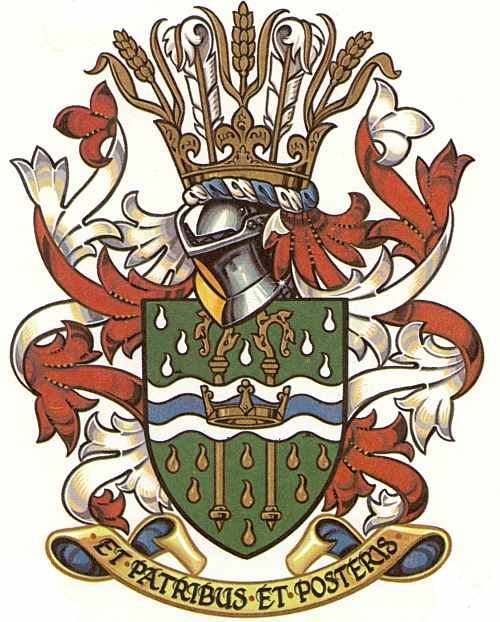 Arms : Vert gutty Argent in chief and Or in base two Croziers addorsed palewise Gold over all on a Fess wavy Argent a Bar wavy Azure surmounted of a Saxon Crown also Gold.
Crest : On a Wreath Argent and Azure out of a Ancient Crown three Ears of Wheat slipped and stalked Or and between them two Ostrich Feathers Argent penned Gold; Mantled Gules doubled Argent.
Motto: 'ET PATRIBUS ET POSTERIS'

The arms were officially granted on December 17, 1981.

The green shield refers to the rich agricultural land which characterises the area. The silver drops represent the rain which, when it waters the land, turns the crops to gold - hence golden drops. The wavy band across the shield symbolises the River Avon, which flows across the District and forms the second element in its name. The Saxon Crown is for the Hwicca, the Saxon tribe who gave the District the first element in its name. The crosiers represent the two great Abbeys, Evesham and Pershore, which once dominated the area.

The District is composed of three Rural Districts and two Boroughs (Evesham and Droitwich) which have ancient royal connections. In the crest the wheat symbolises the old Rural District Councils and the ostrich feathers (royal ensigns) the boroughs.