From Heraldry of the World
Your site history : Yeovil (Borough)
Jump to navigation Jump to search 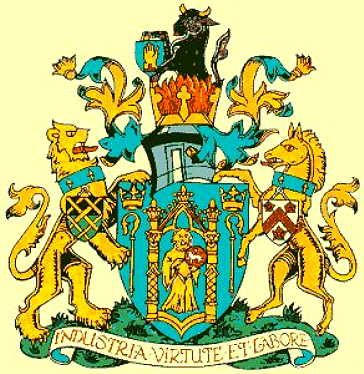 Arms : Azure a representation of St. John the Baptist standing within a Doorway Or in his sinister hand a Torteau charged with a Paschal Lamb proper all between two Croziers turned outwards and each ensigned with an Ancient Crown Gold.
Crest : Out of a Saxon Crown Gold issuant from Flames proper a demi Bull Sable armed and unguled Or supporting between the hoofs an Escutcheon Azure charged with a dexter Glove appaumé Or; Mantled Azure doubled Or.
Supporters : On the dexter side a Lion Or gorged with a Collar Azure charged with two Spear Heads Gold pendent from the Collar by a Rope proper an Escutcheon per fesse Sable and Vert over all fretty Or and on the sinister side a Horse Or gorged with a like Collar pendent therefrom by a Rope proper an Escutcheon Argent with a Chevron between three Roses Gules barbed and seeded proper thereon.
Motto: 'INDUSTRIA VIRTUTE ET LABORE' - By dilgence, courage and work

The arms were officially granted on June 23, 1954 on the 100th anniversary of the Borough status.

The shield depicts Saint John the Baptist as shown on a 14th century town seal used by the town lord and his portreeve. The croziers represent the Bishopric of Bath and Wells and the Abbey and Convent of Syon whose abbess was town lord in the 15th and 16th centuries. The crowns above them are for the Empress Matilda who placed the eleventh century ‘tenement’ of Yeovil under the protection of the parish church of Saint John; and for King John who granted Yeovil a fairs and markets charter in 1205.

The Saxon crown refers to King Alfred the Great, owner of Kingston manor, while the flames it encompasses are indicative of devastating fires of medieval times. The bull, with golden horns and hooves, represents the agricultural and dairy industries - a reminder of the nature of livestock markets which contributed largely to the town’s growth. The golden glove on the small shield is symbolic of Yeovil’s one-time staple industry.

The supporters are derived from the arms of former manorial lords - the lion from the Earls of Arundel, and the horse from the Horseys of Clifton Maybank. The shields they wear display arms of Maltravers, Whitmore and those of Phelips of Montacute, their collars having elements from the arms of Harbin of Newton Surmaville.