From Heraldry of the World
Your site history : Yeovil RDC
Jump to navigation Jump to search 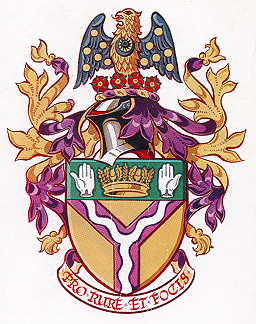 Arms : Or on a Pall purpure a Pall wavy Argent a Chief Vert thereon a Rural Crown Or between a sinister and a dexter Glove appaumy Argent.
Crest : On a Wreath of the Colours in front of a demi Eagle Or wings inverted charged on the breast with a Crescent enclosing an Estoile of twelve rays Sable and on each wing six Bezants four Roses Gules barbed and seeded proper.
Motto: 'PRO RURE ET FOCIS' - For our countryside and our homes

The gold background is taken from the arms of the Somerset County Council and the 'pall' or Y- shapad figure, suggests the initial of the name and also the junction of two Roman roads, one of them the Fosse Way, near Ilchester. The white wavy 'pall' alludes to the River Yeo or Ivel, which gives its name to Ilchester and Yeovil, and means 'the forked river' as in the Welsh ' yr eifl' (the forks).

The purple colour recalls Imperial Rome and the many Roman associations of the district. The green 'chief' refers to the pastoral character of the District and the crown of wheat-ears and acorns is one specially devised for Rural District Councils. The white gloves refer to the distinctive local industry. The eagle is, again, a reference to Roman history and has its wings inverted as on the Roman standards. It also refers to the Fleet Air Arm station at Yeovilton and to the Monteagle family of Martock, for whose arms eagles were the supporters.

The star and crescent on its breast are derived from the ancient borough seal of Ilchester, which no doubt bore them in reference to King John, to whom the device is attributed as a badge. Three of the four red roses come from the arms of the Phelips family of Montacute; the other is from those of Cardinal Wolsey, whose first living was that of Limington. The gold bezants on the eagle's wings refer to the connection of the district with the Duchy of Cornwall.