From Heraldry of the World
Your site history : Yiewsley and West Drayton
Jump to navigation Jump to search 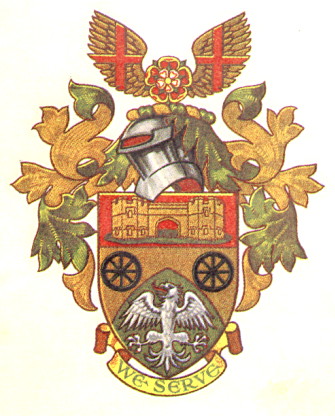 Arms : Per chevron enarched Or and Vert in chief two Cartwheels Sable and in base an Eagle displayed Argent a Chief Gules thereon on a Mount Vert a representation of the Gatehouse at West Drayton proper.
Crest : On a Wreath of the Colours between two Eagle's Wings Or charged with a Cross Gules a Tudor Rose proper.
Motto: 'WE SERVE'

The eagle is from the arms of the Paget family. The Manor of West Drayton was held by William Paget, a famous ambassador and courtier of Henry VIII and Edward VI. The family subsequently held the Manors of Dawley and Harmondsworth. The chief shows a representation of the Gatehouse at West Drayton, this is all that remains of the Paget's great house. It was demolished in 1750 and was used as a badge by the Council before the arms were granted. The cartwheels symbolise the traffic along the Bath Road.

The two eagle's wings with crosses of St. George symbolise the arrival of Queen Elizabeth II at London Airport by air, where she first set foot on British soil after her accession. The Tudor rose represents the connection of the Paget family with the Tudor monarchs.