From Heraldry of the World
Your site history : Zarasai
Jump to navigation Jump to search 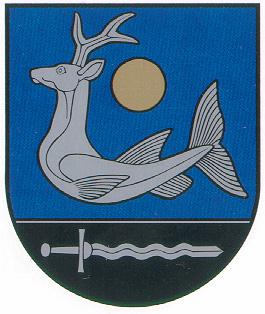 Zarasai first received a coat of arms in 1836, when the town was renamed Novoaleksandrovsk, in honour of Alexander, son of Emperor Nicholas I. From 1919-1929 the town was named Ezerenai, and in 1929 the original name of Zarasai was restored. The old arms showed in the upper half of the shield the Russian eagle, and in the lower a phoenix rising from the flames, and a building in the background. There is no evidence that this coat of arms was ever used.

When Novoaleksandrovsk became a district center, new arms were granted. The new arms showed in the upper half an obelisk, symbol of Kaunas province. The lower half also showed an obelisk as a symbol of the town itself. The obelisk in the town was built in 1841.

In 1969 the city wanted to adopt new arms. The symbolism in the old arms was traditionally imperial Russian, and thus considered unsuitable. The new design showed an imaginary animal, partly stag, partly fish, symbolising the rich forests and lakes around the city. The orb represents the sun. The base of the shield showed a wavy sword, symbolising historical battles and justice. The design was introduced, but already abolished in 1970.

After the independence of Lithuania the design was slightly changed and officially granted on March 7, 1996.