From Heraldry of the World
Your site history : Zuid-Afrikaansche Republiek
Jump to navigation Jump to search 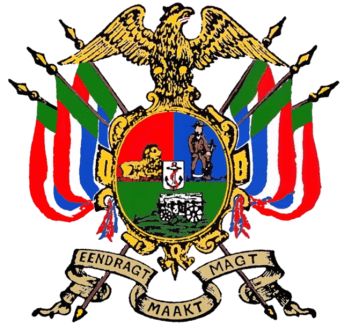 In the 1830s many Dutch-speaking farmers in the British Cape Colony moved northwards to be free of the British suppression as they felt it. This movement became known as the Groote Trek, or Great Trek. A large number of the farmers, Boeren, or Boers, settled north of the Vaal river and established three republics there : the Zuid Afrikaansche Republiek, Zoutpansberg en Lydenburg. The latter were later incorporated into the Zuid Afrikaansche Republiek (ZAR). The British tried to gain control in the republics but failed to do so. In 1852 the British recognised the republics. The British, however, occupied the ZAR between 1877 and 1881. Zoutpansberg and Lydenburg never used arms. The ZAR adopted arms on 18 February 1858. The arms showed a wagon and anchor (both gold) between an armed man (right) and lion (left), with an eagle as a crest.

The arms were not well described and thus all kinds of variations and augmentations were found, as can be seen below on an image from 1867. In 1898 the eagle was turned to face right instead of left. 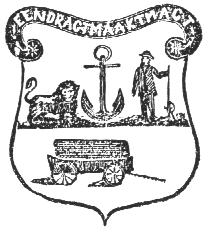 The wagon, originally the most important item on the arms, is a typical wagon used by the Boers during the Groote Trek. The meaning of the anchor is not known. The lion may either be a local lion, or may be derived from the Dutch lion, but the lion has practically always been shown as a natural lion, not a heraldic lion. The arms man obviously is a Boer. The motto means "Strength though unity".

The arms were used until 1902 when the British finally occupied and annexed the ZAR. The arms were, however, restored as the provincial arms of the Transvaal Province in 1951.