From Heraldry of the World
Your site history : 817th Air Division, US Air Force
Jump to navigation Jump to search 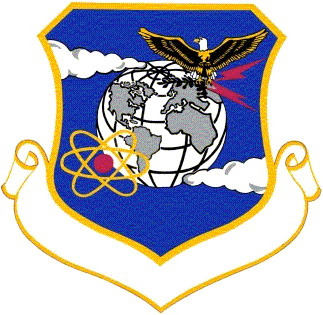 Azure a sphere argent, land masses gray, grid lines and outlines sable, between and surmounted by in dexter chief and sinsiter base cloud formation fesswise of the second, and in sinister chief an eagle or, head and tail feathers white, shading and details of the fourth grasping an olive branch of the last and two ligthning bolts gules, and in dexter base an atomic symbol of the fifth, nucleus of the seventh, all within a diminished border gold. Approved 29 January 1958.