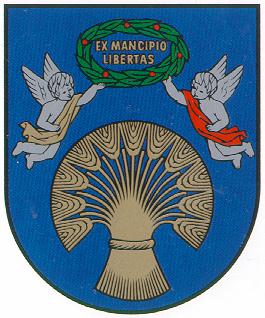 Žasliai was granted city rights on january 12, 1792 by Stanislaus Augustus. At the same time he granted the new city an emblem with a wheatsheaf flanked by two angels holding a laurel branch with the motto 'Ex mancipio Libertas'.

The wheatsheaf, too heavy for the tie, symbolised the rich crops and the wealth of the area. The richness and the freedom won with it, is also indicated in the motto. The freedom did not last long, as the city lost its freedom already some months later. The symbol similarly became obsolete in the same year.

After the independence of Lithuania the new arms were designed based on the old emblem, and officially granted on June 17, 1992.