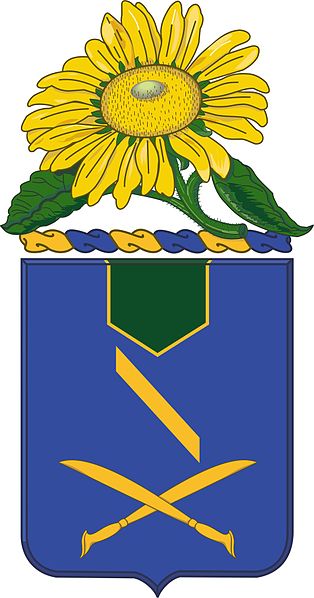 Shield: Azure, a pale fitchee to honor point Vert fimbriated Or, in pale a baton and two bolos saltirewise, cutting edges to chief, of the last.
Crest: That for the regiments and separate battalions of the Kansas Army National Guard: On a wreath of the colors Or and Azure, a sunflower slipped Proper.
Motto: Valor for service

Symbolism Shield The shield is blue for Infantry. The crossed bolos represent service in the Philippines; the green pale fitchee, Mexican Border duty; and the baton is taken from the coat of arms of Varennes in the Argonne. Crest The crest is that of the Kansas Army National Guard.