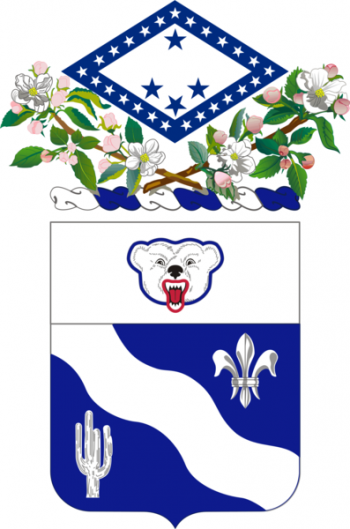 Shield: Azure, a bend wavy between a fleur-de-lis and a giant cactus Argent; on a chief of the last a Great Bear's face of the like fimbriated of the first, lips and tongue Gules.
Crest: That for the regiments of the Arkansas National Guard: On a wreath of the colors (Argent and Azure) above two sprays of apple blossoms Proper a diamond Argent charged with four mullets Azure,
one in upper point and three in lower, within a bordure of the last bearing twenty-five mullets of the second.
Motto: LET'S GO.